A post making the rounds via social media about a shoe that displayed a price tag with the name Muhammad on its sole and outside of the shoe’s box reached the Muslim Judicial Council (SA) over the weekend. Under the leadership of its President, Shaykh Irafaan Abrahams, the MJC’s Executive Council (EXCO) and Mufti Taha Karaan, met with Mr Johan Wasserval, the Managing Director of Shoe City upon his request. 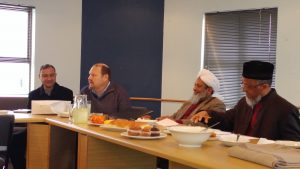 Mr Wasserval was given fair opportunity to present his case and gave a detailed explanation of how the improper use of the name of our most Beloved Prophet, Muḥammad (Peace Be Upon Him) came to be.

The situation arose after Shoe City (a member of the PEPCORE Group) implemented a Style Reference Name for shoes instead of a Stock Keeping Unit (SKU) number. The list of names was provided by their IT specialists who googled the most popular men’s names.

Mr Wasserval tendered his sincerest apology for their ignorance on when the name Muḥammad can be used and when not.
The MJC (SA) accepted Mr Wasserval’s apology and was assured that all shoes carrying this price tag will be recalled and a small committee be established to investigate the list of names being used in future labelling opportunities.

We further requested a formal apology be tendered to the Muslim community of South Africa. This apology was later distributed via Shoe City’s Facebook page on Monday, 31st July 2017. We, therefore, consider this matter closed. We would like to express our sincere appreciation to the Muslim community, who despite feeling deeply hurt and insulted, dealt with the issue in a calm and respectful manner.