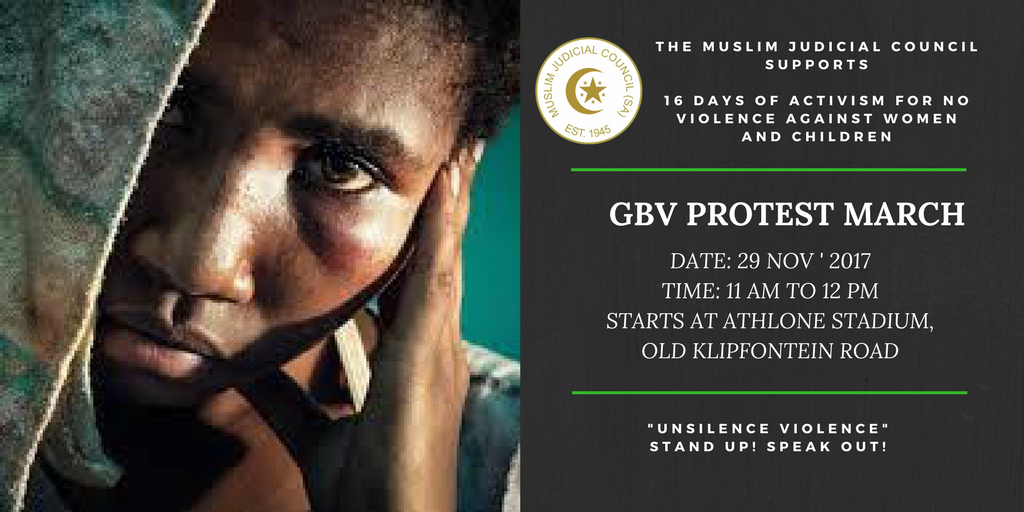 The national 16-Days of Activism are upon us and in support of this initiative, the Muslim Judicial Council in conjunction with the Muslim Judicial Women’s Forum (MJCWF), adopted a Gender-Based Violence (GBV) awareness campaign. The initiative culminates in a protest march, which will be a silent march, themed ‘UNsilence Violence, on Wednesday, 29th November 2017.

Identifying GBV awareness as a campaign, for the 16 –Days of Activism, was, sadly, an easy task – as GBV currently has reached pandemic proportions in the Western Cape and is critically threatening the existence of healthy functioning societies in South Africa. In a recent statistic reported by the Medical Research Council, who found that 40% of men assault their partners’ daily and that three women in South Africa are killed by their intimate partner every day.

“In Cape Town the Cape Flats is the heart of violent crime, drug abuse and gender-based violence, to mention only a few,” Chairperson of the MJC Women’s Forum, Mualima Khadija Patel-Allie said.

“The choice of route was strongly influenced by these facts, as Klipfontein Road cuts through a large part of the Cape Flats and is surrounded by areas affected by crime, poverty and unemployment. All of which are primary contributors to the alarming increase of GBV,” Mualima Patel-Allie continued.

The March is expected to start at 11h00 from Athlone Stadium to Jakes Gerwel Drive, returning to Athlone Stadium. An inclusive programme by relevant stakeholders will be presented upon everyone’s return.

Purpose
We appeal to government, faith leaders, NGO’s, education institutions and all communities to unite against the onslaught on South Africa’s most vulnerable, our women and girl children. We believe only through a united approach by all stakeholders, across all sectors, the desired impact will be achieved.

Additional Community Awareness programmes
The MJC will be embarking on an intense awareness campaign around the theme ‘UNsilence Violence’ – Stand Up! Speak Out! against GBV which includes: