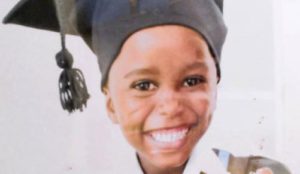 Upon a return trip from family business in Durban, MJC President, Sh. Irafaan Abrahams read an article in the Star Newspaper of a young hero who tragically lost his life in a fight to protect his mother. Kutlwano Garetsape, 6,
from Jan Kempsdorp in the Northern Cape, was walking with his mother, Segomotso and older brother Thabiso, 8, on their way to school after missing their regular bus. It was not long after that when a known assailant approached the mother demanding money and when she refused he attempted to rob her after which he tried to assault her sexually. The mother sent Thabiso to seek help and little Kutlwano stayed behind to help his mother. After numerous attempts by  Kutlwano to fight off the assailant it ended in him being fatally stabbed.

Touched by the emotional article written by Benida Phillips, Sh. Irafaan decided to establish contact with the family of Kutlwano to offer support and requested permission from the family to attend the funeral of the young boy. At the funeral in an emotional gesture whilst addressing the gathering, Sh. Irafaan called young Thabiso, hugged him and offered kind words of support and condolences.

The MJC is still in contact with the family of the young boy to offer support and assistance and is currently in the process of partnering with a sister organization to establish a community project in Jan Kempsdorp in the name of Kutlwano Garetsape.

Follow the link below for the latest on this story;

All posts by MJC
Click here to cancel reply.