MJC meets with the High Commissioner of Singapore 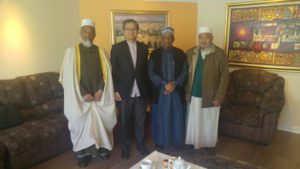 The Muslim Judicial Council (SA) was honored to host the High Commissioner of Singapore at the offices of the Muslim Judicial Council in Athlone, Cape Town. His Excellency Mr Chua Thai-Keong visited the offices of the MJC to meet its leadership and discuss various issues regarding the Muslim community of South Africa as well as issues pertaining to the Halal industry in South Africa. Various MJC members attended including MJC President, Sh. Irafaan Abrahams, former MJC president Ml. Ihsaan Hendricks and senior member and treasurer of the MJC Halaal Trust, Im Omar Slamang.

The MJC leadership gave His Excellency good insight to important aspects of the Muslim community and how Islam in South Africa should be seen as a model for most minority and majority Muslim countries with regards to the way it has been able to navigate through trying periods in its history whilst maintaining its identity.

The MJC remains committed to sharing the South African Muslim community’s experience with the rest of the world with the intention of creating greater awareness and international interest in our minority Muslim community.

All posts by MJC
Click here to cancel reply.