Address of Nkosi Zwelivelile Mandla Mandela on the eve of the Anti-Zionist Protest March. 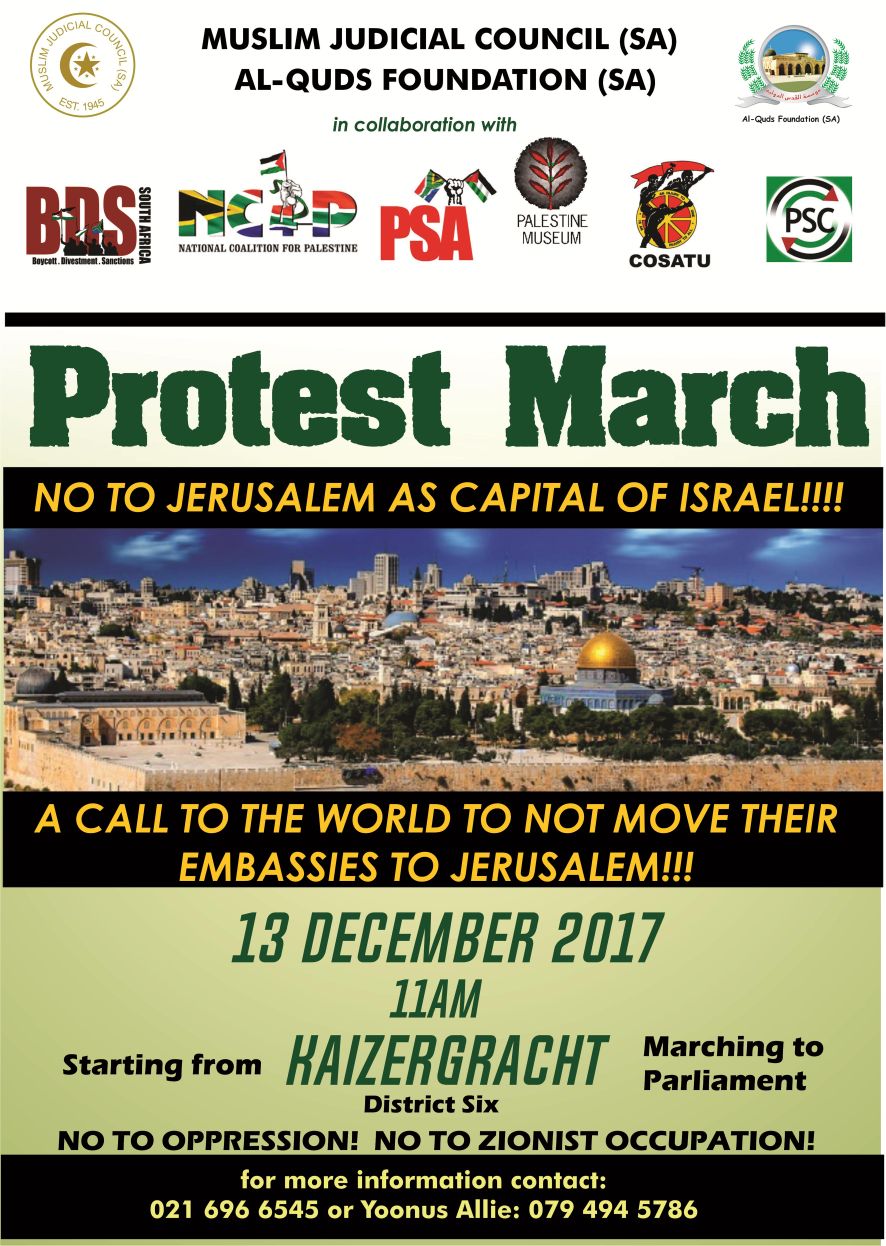 My respected elders, brothers and sisters, friends and comrades.
We call on all the freedom loving people of Cape Town to come out in support of today’s March. Come and make your voices heard! March for Justice! March for peace! March
for freedom! Come and March because our hero and the beloved father of our nation President Nelson Rolihlahla Mandela said: “that we know very well that our freedom is incomplete without the freedom of the Palestinian people.”
Today is a great day because we are all marching for justice. We are speaking with one voice for justice. We are telling the world that there can be no peace without justice. We shall protest. We shall demonstrate. We shall picket. We shall boycott. We shall divest. We shall call for sanctions. We shall continue the struggle until Palestine is free.
We recently returned from occupied Palestine where we witnessed first-hand life under occupation by Apartheid Israel. I want to urge all freedom loving people to come out in your thousands in support of the Cape Town inter-faith March.
Today our hearts are united in the call for justice. Today our voices are united in telling Donald Trump that Jerusalem is not yours to give away. Jerusalem is and shall remain the capital of a liberated and free Palestine. Hands off Jerusalem!….Hands off Jerusalem!…Hands off Jerusalem!
This year 2017 marked 100 years of the Balfour Declaration that gave Palestinian land away for the creation of the Zionist State of Israel. For decades before the creation of the Zionist State of Israel: Jews, Christians and Muslims fought side by side in defence of Palestine. Today this interfaith March brings us together again from every faith and every denomination just as we did in order to bring down the brutal apartheid regime.
I want to add my voice to what the Imam of Al Aqsa Mosque said to Donald Trump, the White House and the USA. We don’t care about your declaration. We shall continue our struggle until Palestine is free. You may illegally occupy every centimetre of Palestine but we assure you that our struggle will continue until Palestine is free!
Today most of you will come from within a radius of 30km a distance similar to the distance from Ramallah in the north to Jerusalem to Hebron where the Patriarch of the Abrahamic Faiths, Judaism, Christianity and Islam, lies buried in the Mosque of Khalil Ibrahim (Peace be upon him). That journey is impossible to undertake without passing at least two Apartheid Israel check-points. 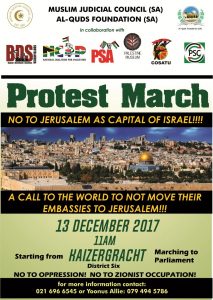 Today we call for the return of six million Palestinians forced out of their homes and forced off their farms. The world stands by in silence as our Palestinian brothers and sisters languish in refugee camps despite International Law and UN Resolutions calling for their return. Apartheid Israel acts with impunity and systematically commits an act of mass genocide in its attempts to liquidate Palestine and drive out Palestinians from their land.
I saw it with my own eyes and I tell you without any fear of contradiction that everywhere you look on virtually every hilltop Apartheid Israel continues to build its illegal settlements. I want to tell you and for all the world to hear that Apartheid Israel has already killed off the two-state solution.
I want to tell you and for all the world to hear that emboldened by their Zionist Lobby friends in the USA and in the White House that Apartheid Israel is already dreaming and scheming of greater Jerusalem and Greater Israel. Today I urge you to come and March against this illegal occupation.
Today I add my voice to the voices of virtually all leaders of the world who have outrightly condemned Trump’s declaration, unilateralism and the ill-considered act of aggression and extreme provocation of the Palestinians and all peace and justice loving people of the world. There have been two voices notably silent on this matter namely Netanyahu and Mmusi Maimane. I call on the people of Cape Town, the Western Cape and South Africa more generally to stop supporting a leader and a party that supports Apartheid Israel so openly and so brazenly.
Today we call for the release of 7000 political prisoners languishing in Apartheid Israel’s jail under the most inhumane conditions. Many of these political prisoners are women some of whom have given birth in jail. Some of these prisoners are under aged children, minors who still need the love and care of their mothers and fathers. This inter-faith March must call for the
immediate release of all these prisoners.
Today, we call on the International Criminal Court (ICC) and demand justice? Where are the butchers of Gaza who massacred innocent women children and the elderly; who dropped bombs on hospitals and medical facilities; who destroyed hundreds if not thousands of homes; who destroyed entire neighbourhoods. When are you serving justice on this act of heinous brutality that daily treats Palestinians as less than human?
Today I call on our South African government to cut off all diplomatic ties with Apartheid Israel. Send the Israeli Ambassador back and shut down the Israeli Embassy in South Africa. Why do we have an Embassy in Apartheid Israel? We must shut down the South African Embassy in Tel Aviv!
I call for the South African Government to cut off all cultural and trade ties with Apartheid Israel.
Stop De Beers from capturing our diamonds and selling it to Apartheid Israel! Stop supporting the illegal occupation of Palestine!
Stop South African companies from building Israel’s Apartheid Wall! Stop issuing visas to our young people to go and man illegal security checkpoints in occupied Palestine!
Stop our young people from committing acts of brutal atrocity against innocent women, children and the elderly by illegally serving in the Israeli Defence Force!!
I call on all delegates to the 54th ANC National General Conference to be held in Nasrec Johannesburg to honour the legacy of Madiba. My grandfather, President Nelson Mandela considered the Palestinian struggle to be the greatest moral issue of our time! I want to tell you that if it was the greatest moral issue in his lifetime, then it has now become a crisis of mammoth proportions and we dare not defer or weaken our struggle for liberation and freedom. I urge you vote for a total shutdown of relations with Israel and closing our Embassy in Tel Aviv.
Down with Apartheid Israel down!
Shut down diplomatic ties with Apartheid Israel Shut down!
Stop supporting those who support Apartheid Israel! Stop!