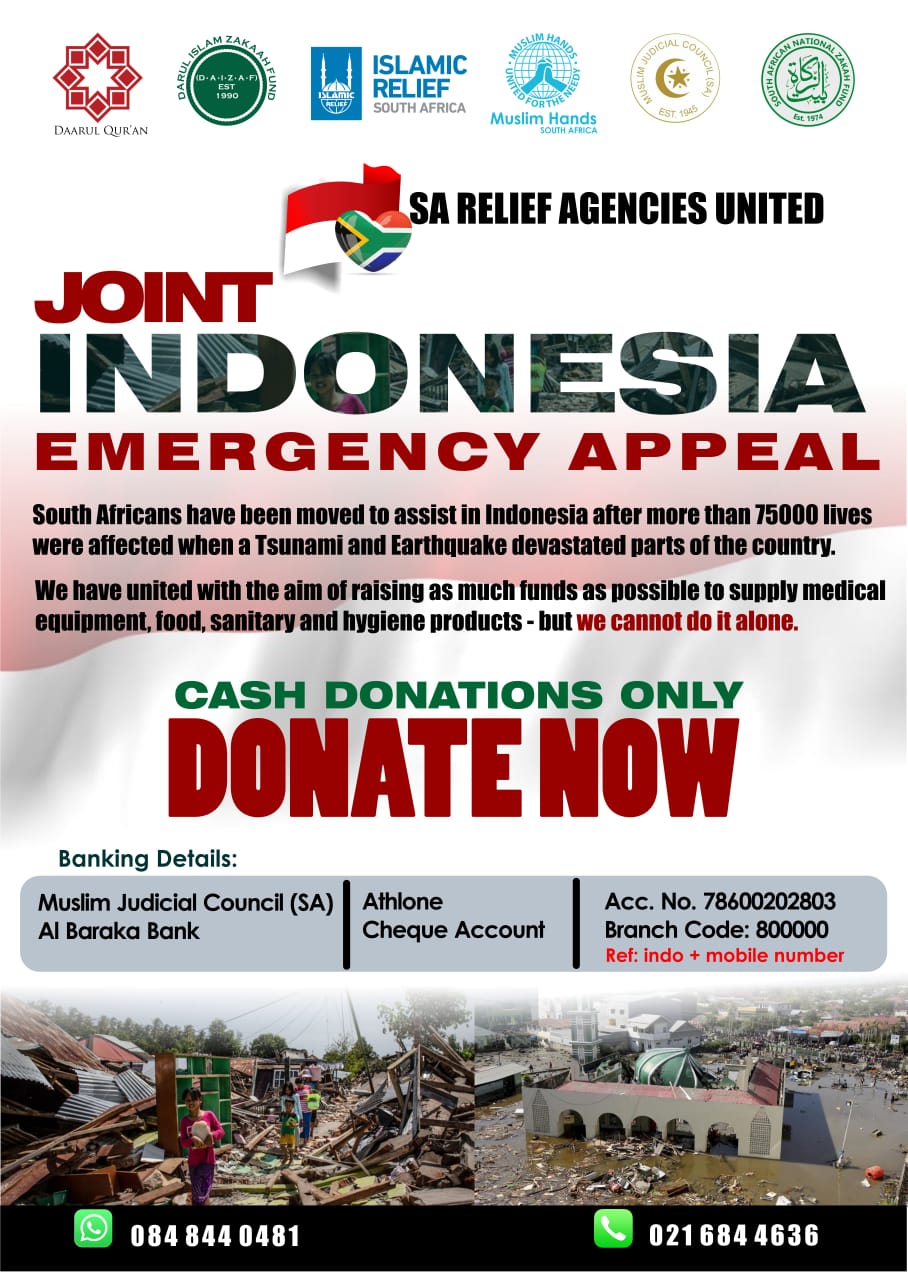 More than 200,000 people are in direct need of emergency assistance, after a tsnumani, triggered by a 7.5 magnitude earthquake, hit Sulawesi island in Indonesia on Friday, 28th September 2018.

According to official reports, the death toll has surpassed 2,000 and more than 10,600 people are injured and in need of medical services. Furthermore, 75,000 people are displaced as houses and infrastructure have been destroyed.

Moved by calls to assist the Indonesian people, South African relief and community-based organisations have united under the auspices of the Muslim Judicial Council (MJC), to launch a R5 million appeal.

The partner organisations are:

Muslim Judicial Council President, Shaykh Irafaan Abrahams, noted that South Africa and Indonesia share a unique relationship through Shaykh Yusuf Al-Makassari — a prolific scholar who spread Islam at the Cape under Dutch occupation. This was just one more reason to respond to the humanitarian crisis.

“It is our duty not to forget our roots and, therefore, we ask every individual to donate generously toward this cause. We want to exceed R5million and show our support to the people of Indonesia,” he said.

The region is also recovering from further natural disasters that has put added pressure on disaster response teams. Mount Soputan erupted on Wednesday and another earthquake was recorded off the coast of Bali on Tuesday night [10 October] measuring 6.0 on the Richter scale.

According to Islamic Relief CEO, Yusuf Mohamed, conditions are slowly stabilizing in Palu, one of the cities badly damaged in the earthquake.

“Electricity and water has been restored in some parts of the city and camps have been set up for families who have lost all their belongings in this tragedy. The challenge though remains in trying to reach families who are still trapped in areas that are inaccessible due to the destruction and debris.”

Meanwhile Muslim Hands Director, Imraan Roomaney, called on the South African public to support the initiative which is a milestone for Muslims NGO’s.

“The formation of this forum is groundbreaking. We wish to express our sincere gratitude to the MJC for initiating this unifying campaign that will greatly benefit the victims of this disaster.”

HOW TO GET INVOLVED

All funds raised through this joint fundraising initiative will be disbursed to partner organizations, who are licensed and already operating on the ground i.e. Darul Quran Indonesia, Islamic Relief and Muslim Hands.

Members of the public are encouraged to support this project by making a cash contribution into the following bank account:

All proof of payments can be emailed to sdd@mjc.org.za for the attention of Shaykh Fadhil Emandien