Unified Khutbah: 16 days of Activism for No Violence against women and children 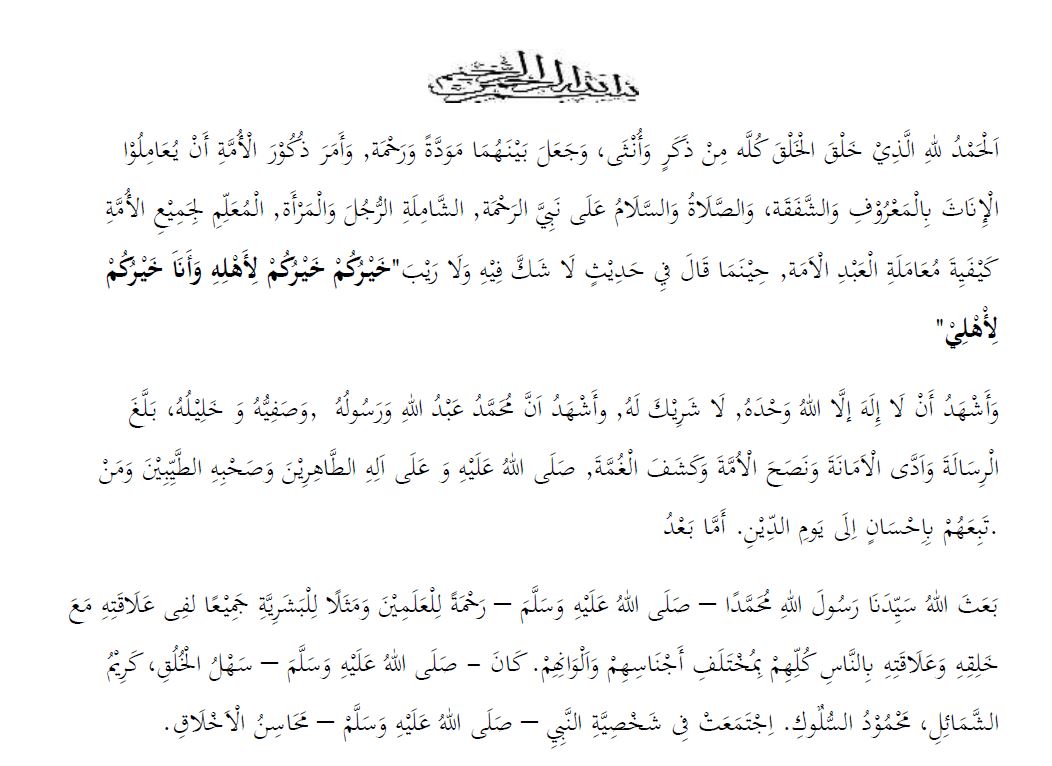 “The believers, men and women, are supporters of one another; they enjoing good, and forbid evil; they perform the Salāh, and give the zakāh, and obey Allāh and His Messenger. Allāh will have His mercy on them. Surely, Allah is All-Mighty, All-Wise.”

In the Saḥīḥayn it is recorded that the Prophet (Peace be Upon Him) has said,

“The example of the believers in the compassion and mercy they have for each other, is the example of one body: if a part of it falls ill, the rest of the body suffers from fever and sleeplessness.”

Speaking to the ayāt and the ḥadīth of the Prophet (Peace Be Upon Him) we clearly understand that all creation of Allāh, men and women, young and old are duty bound to serve Allāh in the exact same manner with no distinctions or differences being made between any of them.

The purpose of opening the khutbah today with the above quotes in mind is to highlight the 16 days of activism for no violence against women and children which is an international campaign that takes place every year from 25th November to 10th December. It is clear that as Muslims we need to be the fore-runners in calling for the equal treatment of all and protection of the weak.

The reference of weak in this khutbah does not necessarily speak to women as being weaker than men in any way, rather the perception that is given of which many had unfortunately adopted. When Allāh makes reference to men’s strength in the Holy Qur`ān, Surah al-Nisā verse 34:

“Men are stronger than women”

This ayah, or part thereof, is a motivation for men to use the strength Allāh had granted him to protect those under his care. Furthermore, if Allāh had already acknowledged your strength, what need do you have in expressing it to those physically weaker than yourself in a demeaning manner?

It is during this time that all effort should be made to bring about awareness to all communities. The awareness of honouring one another as a creation of Allāh, for Allah, had granted all His creation honour. Imagine if, for 16 days, there was no rape, no child abuse or any murder of innocent victims.

For 16 days we lived in harmony with one another. This would ultimately lead to the 16 days becoming 365 days, Āmīn.

The 16 Days of Activism for No Violence Against Women and Children campaign challenges South Africans to declare a truce on violence against women and children – and, ultimately, to make
it a permanent way of life. A way of life that Islām strongly encourages. Around the country, South Africans are being called on to combat violence against women and children, and as Muslims, our
hands should be raised high in support of this initiative.

Violence against women and children, that is not absent in our Muslim communities, has become some sort of epidemic of which there is no end. An epidemic born from unnatural causes and
the inclination that men are superior in any form to that of women and children.

Violence against our women and children has no class, colour, status, shape or religion…yet it exists.

We are living in a sad reality where there is absolutely no respect shown towards women and children. Our own mothers, daughters and sisters are not safe in their own homes. Unfortunately,
besides the perpetrators, the biggest culprits for the existence of this epidemic is you and I.

You might be sitting here saying: “But what did I do?” and that is exactly the problem. We have been doing nothing or very little.

The time for telling our women and children to have ṣabr (patience) in the face of being physically and emotionally abused is gone. The time for allowing our women and children to suffer at the hands of the abuser while they, the perpetrator, are allowed to walk free because Islām says that we should “bedek/beskerm/cover up” for our own is gone as this is definitely misinterpreting our religion.

The time for justifying abuse needs to leave our homes, families and communities. There is absolutely NO reason that justifies humiliating anyone, taking their honour away that was bestowed
upon them by none other the ONE who had created them, Allāh. The time of asking a victim of abuse what they had done to deserve such a beating is ridiculous and again has no place in our
community.

In South Africa, one in every 5 women experiences some sort of violence, mostly from a person who is known to them which is most cases are their intimate partners. According to WHO (World Health Organisation), 35% of women around the world experience physical violence. That is 1 in every 3 women. Why? Because we are doing nothing about it.

If we would like to bring this statistic home and make it a reality then this would mean that 1 in every 5 men sitting in this masjid here today is an abuser. The other 4 should be standing up and
saying loud and clear, “NOT in my name and neither in the name of Islām”.

SA’s 2016 Demographic and Health Survey released 2016 stats where 17% of women experience violence within the first year of a relationship. Why? Because we doing nothing about it.
On our doorstep, one of our neighbouring communities is the murder capital of the world. Most murders being committed by an intimate partner.

We hear on a weekly basis the brutal killing and rape of our young children. Every week we read about a murder and/or rape of innocent victims, some not being able to stand up for themselves as
they are as young as 2 years old and even younger, It has come to a point where it is almost a norm within our community and city to hear this…it needs to end!

At the MJC (SA) Social Development Department, 80% of the cases dealt with is based on the partner experiencing some sort of abuse from their spouse. Is this what our dīn preaches? Was this
the character of our beloved Prophet (Peace Be Upon Him) whom we claim to love and follow?

“And live with them honourably”

This means saying kind words to your wives, treating your children with honour and dignity just as you expect them to treat you.

The Prophet صلى الله عليه وسلم reminds us in a beautiful ḥadīth stating:

“Indeed among the believers with the most complete faith is the one who is the best in conduct, and
the most kind to his family.”

In another ḥadīth, the Prophet (Peace Be Upon Him) told the saḥābah:

“The best among you is he who is the best with his family. Verily, I am the best one among you with my family.”

Under no circumstances is violence against women, children or anyone for that matter, encouraged or allowed in Islam. There are many examples in Qur`ān and aḥādith that describes the behaviour of Muslims towards one another. An example of this is husband and wife. The relationship should be one of mutual love, respect and kindness.

“O believers treat women with kindness even if you dislike them; it is quite possible that you dislike
something which Allāh might yet make a source of abundant good.”

We remind ourselves that the Prophet (Peace Be Upon Him) said:

To whom is due our love and compassion more than our mothers, sisters, daughters? There is NO difference between a male and female in the court of Allah and all will be treated equally and fairly with justice and equity on the Day of Qiyāmah. Thus, let us be equal and far with one another.

We ask Allah to make us of those who will allow justice to prevail and be of those who honour our women. May Allah in return shower us with honour on the Day where honour will prevail, Āmīn. 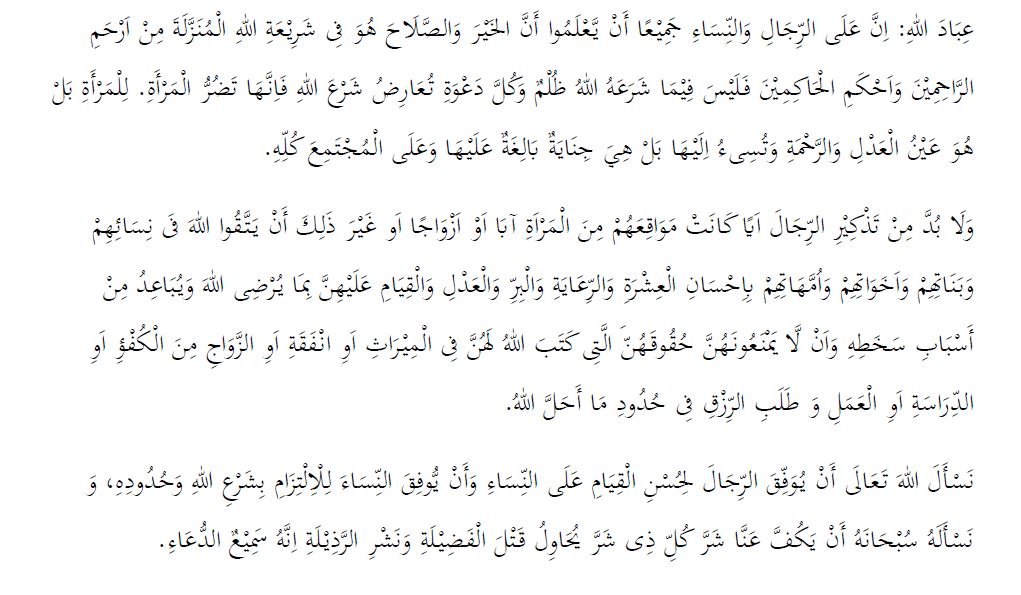