Athaan not to be affected by City By-laws 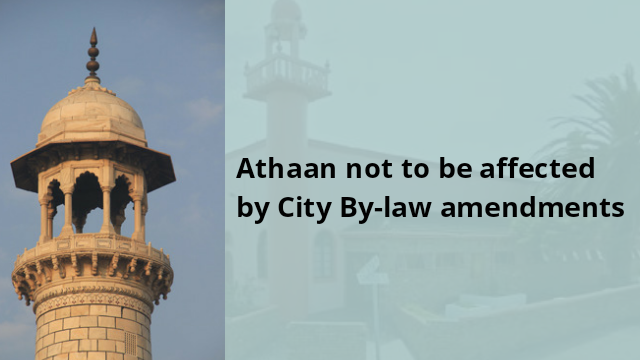 MJC: AMENDMENTS TO CITY BY-LAWS WILL NOT AFFECT THE ATHAAN

The Muslim Judicial Council (SA) hereby states that a joint meeting was held between the MJC (SA) and the City of Cape Town on 30th April 2020, represented by Chairperson of the Safety and Security Portfolio Committee, Councillor Mzwakhe Nqavashe and Councillor Aslam Cassiem. This meeting was called by the City of Cape Town after concerns were raised of an intent to amend the current Streets, Public Places and Prevention of Noise Bylaw, alleged to be negatively affecting the calls to prayers 5 times a day (the Athaan).

The Streets, Public Places and Prevention of Noise Bylaw consists of 25 sections and the section dealing with what the law refers to as Noise Nuisance is listed as section 3(S3) in the by-law. The current proposed changes to the by-law relate only to one section, namely Section 22, titled: Enforcement & City May Act and Recover Costs. Section 22(S22) of the document does not relate to or affect the Athaan in any way as explained by Councillor Nqavashe and Councillor Cassiem.

Councillor Nqavashe and Councillor Cassiem assured the MJC (SA) that although the by-law aims to strengthen the powers of the law enforcement, places of worship will not be affected by the current procedural and technical amendments. Councillor Cassiem further stated that the remainder of the by-law (other than Section 22) will be subjected to further review later this year or early next year, which will allow for additional amendments, which could also apply to the exemption of places of worship from the current noise nuisance provisions. This additional and amendment will be tabled by Councillor Cassiem next year and has already been discussed by the governing party in Council.

The MJC (SA) also raised concerns over new Masajid that may be built in the future, the heritage overlay of the Bo-Kaap and extended Masajid programmes on the streets like mass Iftaars (sunset breaking of fasting). Both councillors indicated to the MJC (SA) that the by-laws of the City do not impede any religious and cultural practices but seek to provide a regulatory framework within which all use of the public places can be done safely and reasonably. They further added that the City is always willing to support such events by providing the necessary support in response to event applications to the City of Cape Town.

The councillors would like to commit the City to exploring any future amendments to the by-laws affecting the issues of concern raised by the MJC and indicated that the City is committed to finding workable solutions that protect the rights of all concerned.

Councillor Nqavashe also explained that the function of the amended Section 22 of the by-law was to regulate how the City can now recover costs. For example, Section 7 (c) of the current by-law (which is not being amended), prohibits any person from obstructing a sidewalk. If someone is building and leaves a pile of rubble on the sidewalk or perhaps some dried concrete, the City would then have the responsibility of cleaning or removing the obstacle. The City could issue them a compliance notice to have it removed. Previously, if they do not adhere, the cost of removal would fall to the City, which would use rates paid by residents to pay to fix a problem caused by one of their neighbours. This is not fair. The new amendment allows the City to have it removed and then to recover that cost from the offending neighbor or their builder.

The MJC (SA) encourages the community to read the document carefully and to submit comments on the proposed amendments as only few days left till last day the 17th May 2020. We will continue to engage the City on this issue and a follow-up meeting has already been agreed to. We will keep the community updated as the situation unfolds.

Office of the Secretary General

The MJC and the City