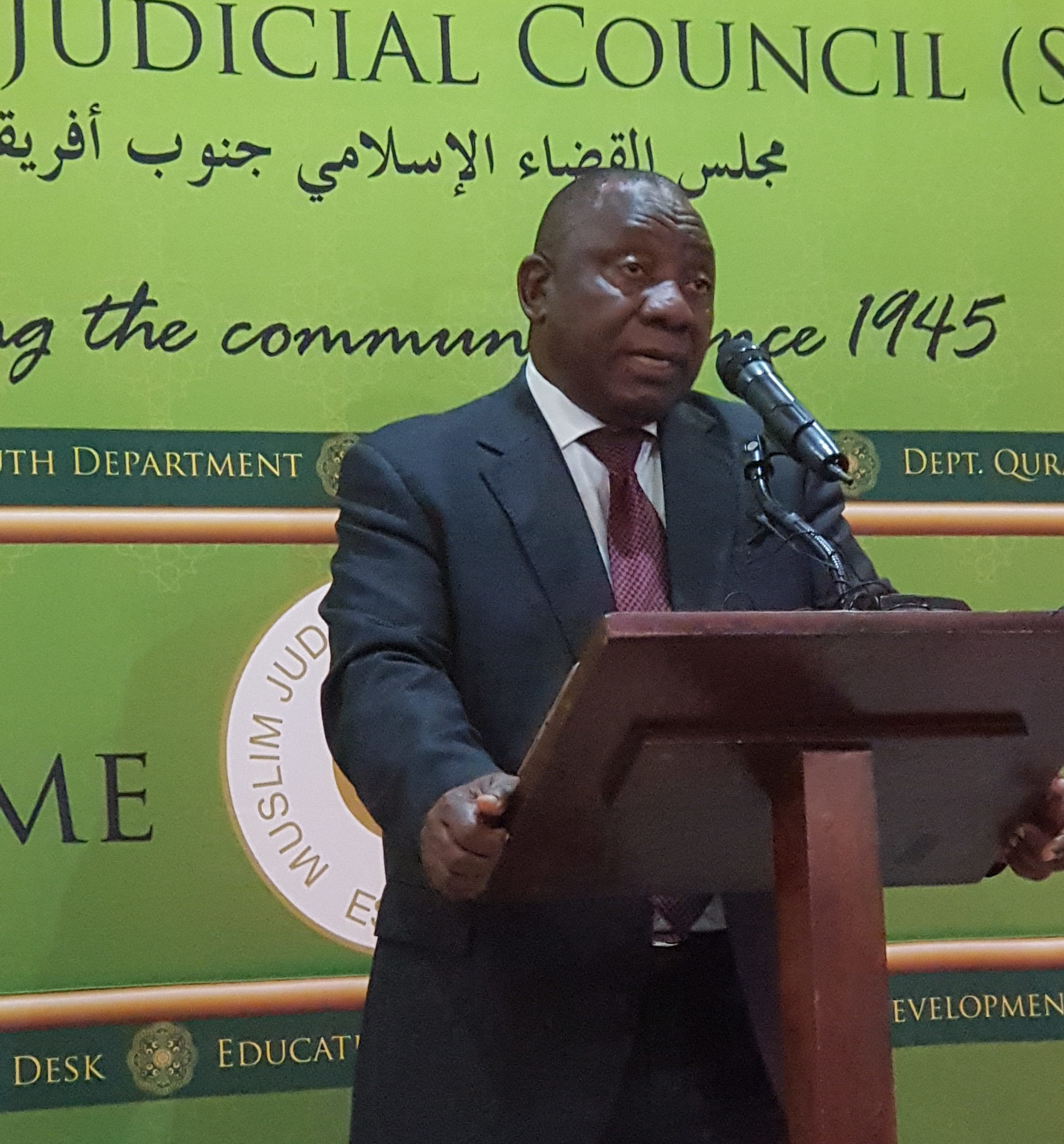 This was President Ramaphosa’s maiden Iftar with the Muslim community. It was an opportunity for the state president to engage with prominent Muslim scholars, politicians, community leaders and civil society movements. The dinner aimed to build a stronger relationship between civil society that works in partnership with government thus ensuring the social development and economic growth of all South African citizens.

Below is the speech of the MJC President Shaykh Irafaan Abrahams:

Assalaamu Alaykum Waraghmatulaahi Wabarakaatu
Good evening to one and all.

The MJC is indeed honoured and privileged to be hosting the President of South Africa, His Excellency Mr Cyril Ramaphosa.

Honourable guests, as we know, everything has a form and an essence. Whilst fasting in Islam assumes the form of abstention from food, drink, and marital intercourse from sunrise to sunset, its essence is to cultivate God-consciousness. The revolutionary nature of the month of Ramadan rekindles in us the ethos of being human and the challenges that face us as part of a collective rather than as an insular and insignificant individual.

During this holy month of heightened spiritual awareness, we, therefore, commit our collective consciousness to eradicating the daily struggles of our peoples, by fostering and translating this spirit, to the extent that Ramadan crystallizes the epitome of our self-sacrificing nature and benevolence to bringing about social justice.

HISTORY OF THE MJC
The Muslim Judicial Council has a strong history and relationship with the ANC. Our first president and father of our nation Mr Nelson Mandela in his speech in 1997 at the Oxford Centre for Islamic Studies said: “South Africa’s vibrant Islamic heritage is a valued and respected part of our nation. It is contributing to the forging of a new South African identity.’

As the MJC we are proud of this history. As you will know Mr. President, Islam was a banned religion since it arrived at the shores of South Africa and for a period of about 150 years, Islam was a forbidden religion. Together with our compatriots we actively fought for the dismantling of successive imperial, colonial and apartheid regimes.

As a Muslim community, we acknowledge and reinforce the role of the ANC in the struggle for freedom and liberation. Today we are the beneficiaries of this freedom, being able to not only practise our faith but also to have our culture and religion respected and protected by our Government and the ruling party, the African National Congress by way of the Republic of South Africa’s Bill of Rights.

Mr President, as a people who stand with the oppressed in other parts of the world, we appreciate the progressive position the ANC took when it invited the leader of Hamas, brother Khalid Mishal as its official guest in October 2015. Brother Khalid Mishal went on record and said that the South African Government has been one of the greatest supporters and friends of the people of Palestine.

We applaud your administration for leading the global world along with Turkey in downscaling the diplomatic missions in the illegitimate state of Israel and call for the full recall of our representatives from this Apartheid State.

Of concern to us is the escalating conflict in Syria that has destroyed an entire nation and caused one of the biggest humanitarian crises the world has ever seen. In addition to Syria, Yemen, Myanmar, Afghanistan and conflicts on the African continent are also of grave concern.

Mr President, I would be failing in my duty if I do not highlight some of the burning issues we face as a Muslim community and as a nation:
1. Muslim Personal Law/ Muslim Marriage Bill
This issue has been a major concern for the Muslim community since we achieved our freedom and democracy in 1994. Our marriages are NOT recognized thus our children are regarded as illegitimate. Even when we die, our death certificates reflect, “not married”. This points to the moral indignity of our marriages NOT being recognized as legal.

The customary marriage act had differences of opinion, but it was political-will that saw the enactment of this bill. The overwhelming majority of Úlamā (Muslim Theological and Judiciary) bodies agree with the most recent draft of the Bill and therefore we now ask your Honourable office to apply the same political-will for the Muslim Marriage Bill to become the Muslim Marriage Act.

2. Land issues
Another issue of contention Mr President is the issue of land in South Africa. Gentrification efforts spearheaded by Local Government has seen the unilateral increase of rates and taxes. This, in turn, pushed and uprooted our people out of the inner cities to far-flung areas. In Bo – Kaap 4th generation inhabitants of their homes are forced to sell as they can no longer afford to live in the historic quarter.

Mr President, the State’s Restitution programme, noble as it is, 24 years into democracy, merely scratched the surface. As an example, District 6 has only seen 200 families of the 5 000 return to their beloved home in the shadows of Table Mountain. Two presidents have attended and opened phases in District 6, however, the project is nowhere near completion. The City of Cape Town is NOT or refuses to release land as they fear that property prices in the CBD will decrease if the construction of GAP housing is allowed.

Mr President, we request of you to call for and convene a District 6 Summit to address this issue.

Over the past two weeks or so Land Invasion has been more prevalent in the suburbs of Cape Town. We understand the frustrations and impatience of informal settlement residents and backyard dwellers – some of whom have been living in these conditions for more than 30 years.

However, illegal land occupation has many consequences. At this junction, we wish to highlight the unintended racial tensions that affect those of us who live in the cold face of community engagement. Mr President, we appeal to you to find and institute immediate solutions to these challenges whilst we as a country address land redistribution.

3. Safety and Security
The scourge of gangsterism & drugs, as well as the high crime levels in our society, is crippling our communities and suffocating our citizens. Mr President, there is a desperate need for a dedicated gang unit within SAPS that is, better equipped and resourced to eradicate this plague (of gangsterism and drugs) from our societies.

Honourable President, Unemployment is at an all-time high. The Muslim community was well known for its artisan trade. We built most of these buildings you see in and around Cape Town. Sadly, this trade is dying out. We request the Government to renew its efforts in promoting and incentivising the construction and other trades.

Stability and security of our country is the responsibility of each and every South African. We call on all our citizens to assist the Government in identifying any activity that poses a threat to our safety and security as a democratic nation, as well as our shared values of freedom.

4. Infiltration by extremist
As citizens of South Africa, peace and stability are paramount. As a community, we have contributed and sacrificed towards attaining this. Therefore, we value and appreciate the freedoms of all South Africans to practise their religion unhindered, and unrestricted.

We note with deep concern, the attempts made by foreign elements and extremists to infiltrate our country and communities. These elements serve the agendas of nefarious forces seek to disturb the harmonious balance we have developed over centuries with our compatriots of colour with whom we have shared equally the burdens of colonialism and apartheid.

The recent attack on the mosque in Verulam we completely condemn and in fact, I visited the mosque days after the murder to express our sympathies with the community. We are a law-abiding community and an integral part of South African society.

We avail ourselves to assist the State in combatting extremism and foreign influences that seek to destabilize our country and our democracy.

5. Strategic Partnerships
The Muslim community has active and large community development and social cohesion programmes. In the past financial year, we estimate that as a collective the Muslim Community of South Africa, contributed in excess of R2, 5 billion in social development initiatives to the people of South Africa.

AS A COMMUNITY WE COMMIT AND PLEDGE TO PARTNER WITH THE REPUBLIC OF SOUTH AFRICA’S GOVERNMENT IN PROVIDING THESE MUCH-NEEDED INTERVENTIONS AND MUCH-NEEDED SERVICES TO THE NEEDY COMMUNITIES OF THIS BEAUTIFUL AND UNIQUE NATION. WE TAKE PRIDE IN OUR MULTI-CULTURAL AND MULTI RELIGIOUS, AS WELL AS PEACEFUL CO-EXISTENCE.

MR PRESIDENT WE BESEECH YOU to continue this great interaction and relationship with our Community by working with us to build a strong civil society that works in partnership with government to address our common challenges.

In the near future, we would like to see the establishment of an inter-ministerial task team to partner with our community as we collectively address the Socio-Economic challenges we face as a nation.

Mr President, we a peace-loving and benevolent community, as well as an integral part of the landscape of this country. Allow us to assist in fulfilling Tata Mandela’s dream of creating a prosperous and peaceful Africa.

We conclude with a prophetic saying of our role-model, our beloved Prophet Muhammad (Peace be Upon Him), who said, “The best of mankind is he who is most beneficial to mankind.”
Shukran / Thank you”