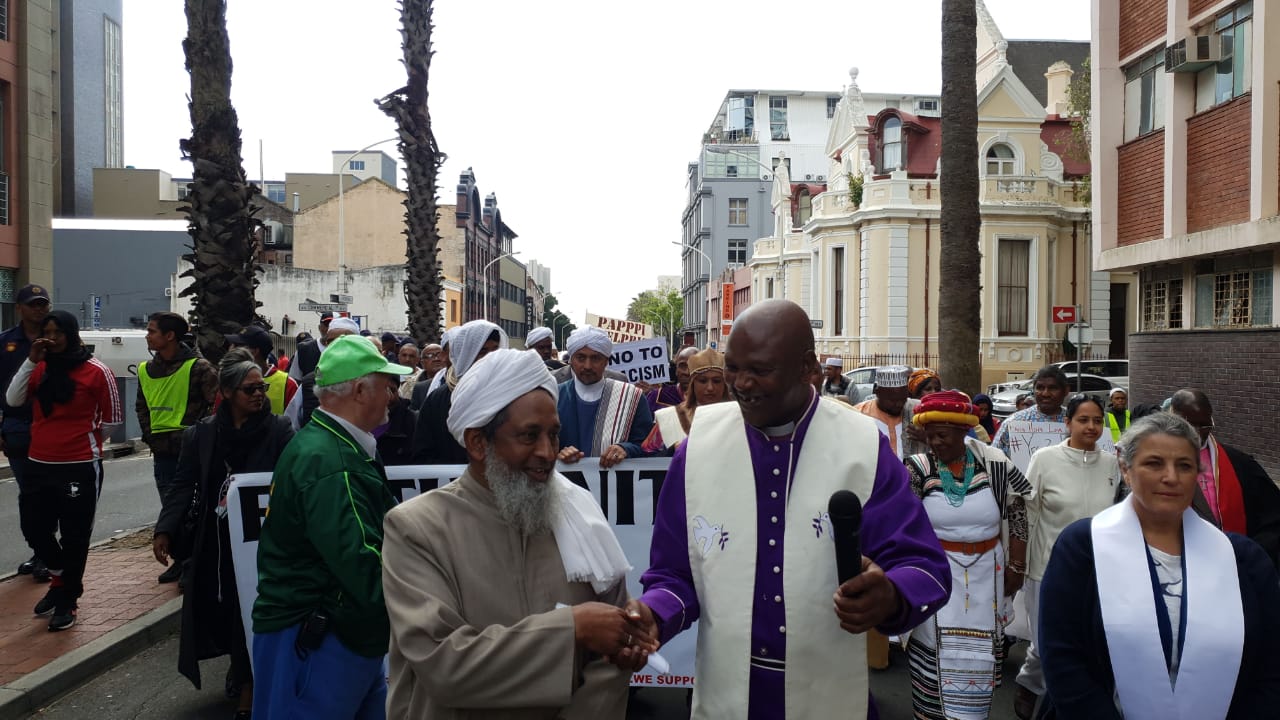 We, the Faithful of South Africa, greet you in the name of all the religions that make up the Greater community of Cape Town. We come before you humbly today in peace and in silence and in the name of the Sacred Texts of the various religions we represent. We are as diverse as the flowers in the garden, but we are united in our desire for peace, for justice, for a better world, a more fragrant garden, for our children.

We are united in our love for and commitment to the Constitution of South Africa which was so celebrated when it was promulgated by our beloved former President Nelson Rolihlala Mandela on 18 December 1996. Nothing has changed in this regard, and we are here today to lead our country back to the hope and belief we felt at that time. As you can see, Honourable Mr President, our scriptural teachings give us a powerful point of commonality in perfect alignment with the National Constitution that is still regarded on the international stage as one of the best constitutions in the world.

Honourable Mr President, with all due respect, it seems that South Africa has wandered very far from the spirit and the letter of that constitution. We find ourselves now in an untenable position where the rule of Law is replaced by gang rule in our suburbs, where fear stalks every child on every street and where blood flows more violently than in the warzones to the North. The crime statistics released by the Honourable Minister of Police just a week ago emphasised the gravity of the situation in which we find ourselves. Included in the statistics was the information that the Western Cape features 7 policing precincts out of 10 nationally for having the highest number of murders. This is a devastating situation.

We, as religious leaders, take this very seriously and believe that we need to have a holistic approach applied in turning this around. We have, on numerous occasions in the past and through a variety of agencies representing the people of Cape Town, presented memoranda to provincial and other government authorities. The lack of response leads us now to appeal directly to the Office of the State President for intervention.

The Faith Leaders of Cape Town have united with the common purpose of restoring the moral compass, strengthening spiritual leadership and encouraging a return to well-being in the living
environments of our people.

We are urging you and your esteemed cabinet to address the injustices that are contributing to the mood of despair. We are urging Government to become accountable for restoring the lived experience of the human rights enshrined in our Constitution. We are urging Government to accept that we, the people, are committed to the process of betterment and are willing to work in partnership with government agencies to achieve peace and create a solution that will enable us to raise our children in safety and to leave a sustainable world for them to inherit. The socio-economic and political turmoil is eating at the fabric of our society and we believe that together, we can solve this challenge. We all need to participate because we must all be a part of the solution.

Faith Leaders are important because they hold the moral authority and represent the heart of the people.

Our proposal is for Government to host a Summit where all roleplayers and stakeholders will be represented and where we may engage at the highest level on solutions and a way forward. Such
a summit would necessarily include the private sector, government and public sector.

We, the people, support a Pro-Active Government which engages with the people in the search for solutions and resolutions. Some of the areas of concern include:
• Corruption
• Unemployment
• Poverty
• Lack of equality
• Unfair and unbalanced deployment of police resources
• Criminal profiles on young children
• Little protection for the vulnerable in our society – women, children, the elderly
• Known criminals arrested but released within a short time, with no charges being laid despite eye-witness evidence
• Our law enforcement agencies including our judiciary are failing. They need to be remotivated and recommitted to performing the task for which they exist.
• Social injustices, gangsterism, drugs

In partnership and with a common purpose, our communities are committed to working together with Government.

Honourable Mr President, our doors are open. Please engage with us, the Faith Leaders, and allow us to speak for the people that we represent, whose hearts we know and whom we work with on a daily basis. Allow us to help you to help our communities. This is the Sacred Task that you are called to, to govern a country that is rich in its passionate diversity. Right now, our communities are ungovernable.

Right now, children are being sent to safe houses far from their homes to protect them from the gangs. Honourable Mr President, it is not the children that must be removed, it is the gangs. We are urging you to exercise your powers and to invest in manpower training, in the acquisition and fair distribution of resources and in the community-based organisations that stand ready and willing to engage in public-private partnerships for the Greater Good of our communities, our workplaces, our city and our country.

Honourable Mr President, we thank you for your attention and your deep consideration of our submission.

We commit to doing everything in our power to strengthen the spiritual leadership and moral fibre of our communities. We do not ask you to do anything that we are not prepared to do ourselves, we ask only that you exercise your considerable powers to help us.

In peace and in humble appreciation

Signed in Cape Town on 20 September by the following organisations: